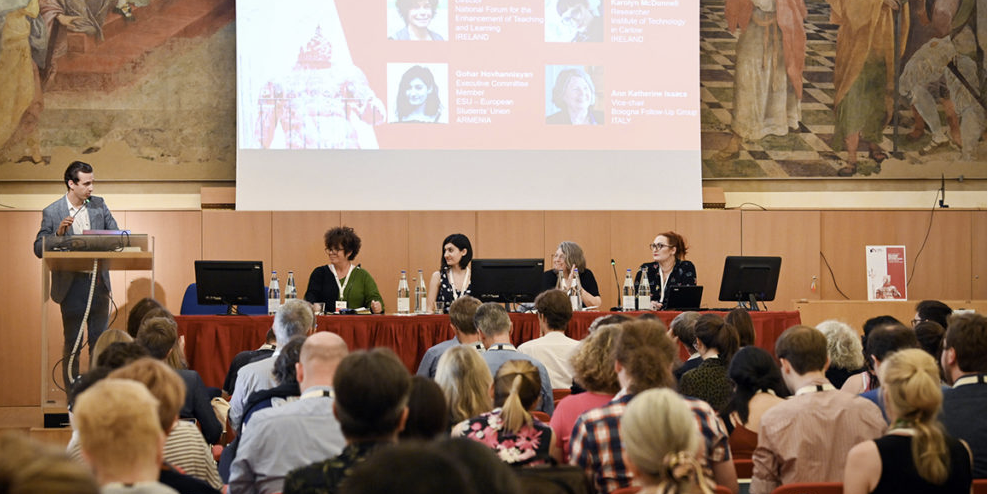 An event marking the 20th anniversary of the establishment of the EU’s Bologna Declaration took place in Bologna, Italy on 24 and 25 June. The Bologna Declaration marked a turning point for higher education in the EU, encouraging openness and the sharing of knowledge and good practice across borders. It has led to more efficient and streamlined processes and structures within higher education, including the establishment of the European Credits Transfer System, increased standardisation of degree structures, and increased mobility of students and staff across the EU.

The anniversary conference was attended by over 1200 students, staff and policy partners from across the EU and included a celebratory ceremony, as well as panel discussions on topics such as academic and related civic values in changing societies, student-centred learning, leadership for sustainable development, and the social dimensions of higher education. The Director of the National Forum, Dr Terry Maguire, was an invited panel member on the student-centred learning panel, which took place on 25 June. Karolyn McDonnell, a previous National Forum Student Associate Intern, was also invited to the panel, representing IT Carlow. Conference attendees had an opportunity to learn from the student-centred ethos of the National Forum, reflected in its close collaboration with the Union of Students in Ireland, the National Forum Student Associate Internships, the student-nominated Teaching Heroes Awards and the continuous focus on ensuring student representation and voice in all decision-making related to teaching and learning in Irish higher education.

More information on the Bologna Conference, including photos from the event, can be accessed here.

National Forum for the Enhancement of Teaching and Learning to come under the auspices of the HEA
May 31, 2022

Get Updates In Your Inbox!

Interested in keeping informed about teaching and learning in higher education?
You can unsubscribe anytime.